Summer and Fall 2013: Performances and Exhibit

I knew when I started this blog that updates would be few and far between, as I like the practice of making work much more than promoting it.

Having pretty much been on "break" since my collaborative performance with LaToya Ruby Frazier during the 2012 Whitney Biennial, I am now entering into a period of uncharacteristic activity with three performances coming up in Baltimore, DC and Philadelphia and a solo exhibit at Brooklyn's Outlet Fine Art .

But first a quick word about the amazing performance that I did this week with my dear friend, poet GE Schwartz.  Somehow, we keep getting into the quadrennial INSAP conferences, which are devoted to the intersection of art and astronomy. We did The Adler Planetarium in 2005 and Florence in 2009. This years edition took place at the Hayden Planetarium in NYC. We were selected to perform Voyager Now! a multimedia performance  based on GE's poem about the Voyager probe. In the poem, the Voyager probe, which was launched in 1977, to spread earth's humanitarian love to the universe, returns to the earth and transforms itself into a Predator Drone, which then travels out of the solar system to wage war. For this piece, I created a 2K fulldome projection and performed a live sound component. Some images below. 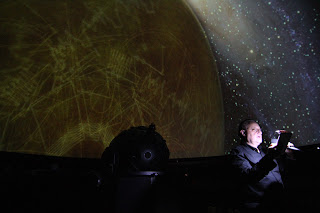 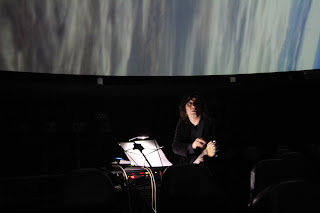 I'll be heading down to the Baltimore area in late July to teach my Multimedia Art History course in Goucher College's MadArts graduate program and thought that it would be fun to do some performances while I'm away. So I'm very excited to announce the following dates:

Friday July 26 at The Red Room in Baltimore with Andrew Bernstein and M.C. Schmidt (thanks, Andrew!)

Friday August 2 at the Dog Daze Festival in Washington, DC (thanks, Andrew again)

Saturday August 10 at Aux Space  in Philadelphia with AP Vague and Ian M Fraser (thanks, AP!)

And I'm also happy to announce an upcoming solo exhibit at Outlet in Bushwick, Brooklyn. For this exhibit, I will be doing a sound and media installation based on Mozart's Magic Flute.  The exhibit will run from Sept. 13-29.  (Thanks,  Julian Jiminez Howard and Aliza Kelly).

Time to get to work!

PS-I'm slowly working on my next album for Praxis Classics . Release date should be later this year....


Posted by Praxis Classics at 12:48 PM No comments: